The third event in our Chef Series is with Merlin Labron-Johnson. Double Michelin star Chef Merlin, one of the most exciting chefs and restauranteurs in the UK. Merlin opened his first solo venture, Osip in Bruton in 2019 and more recently, The Old Pharmacy. His menu will draw on flavours of rural Provence, where the French Riviera meets Northern Italy.

The menu is inspired by recent travels to Italy, while also shining a light on the best quality ingredients from local Somerset suppliers.

10% of proceeds will be donated to Choose Love, a charity which provides humanitarian aid to, and advocacy for, refugees around the world.

We can cater for vegetarians, please notify us upon booking should you wish to have this menu. Regrettably, we are unable to accomodate other dietaries due to the nature of the style of service. Please note all bookings are for two hours unless otherwise agreed. Due to the large number of diners, we will need to begin serving food within 15 minutes of your booking time.

The ticket includes a welcome cocktail, 4 course menu and digestif‍

Merlin grew up in Devon where he was always fascinated by the agriculture surrounding him. At a young age he fell into cooking in his school kitchen, realising his passion and leaving school at sixteen in order to pursue it as a career. Moving to France in his teens, Merlin cut his teeth at two-Michelin-starred Albert 1er in Chamonix, and then cult restaurant In De Wulf in Belgium, continuing to hone his skills throughout Europe before returning to the UK.

In 2015, Merlin opened Portland restaurant on Great Portland Street in London, which was awarded a Michelin star just nine months after opening when Merlin was only twenty four years old. He went on to garner critical acclaim for both Portland and its sister restaurant, Clipstone, which opened in 2016. Led by seasonal produce and shining light on great quality ingredients, Merlin’s cooking is underpinned by his classical French training with modern and innovative sensibilities.

In 2019, Merlin opened his first solo venture, Osip, in Bruton. Embodying his farm-to-table philosophy of cooking and inspired by the ‘tables d’hote’ of France, Osip’s menu is informed by local produce sourced from the restaurant’s allotment and garden space, runby the kitchen team themselves, with Merlin creating each dish according to which ingredients are available that day. Just over a year after opening, Osip was awarded its first Michelin star.

Throughout his career Merlin has supported and championed a number of charitable and altruistic initiatives, including cooking regularly at the Refettorio Felix centre for homeless people, contributing to the Chefs’ Manifesto in support of the UN’s sustainable development goals, as well as partnering with Help Refugees by travelling to refugee camps across Europe to cook for those in need. 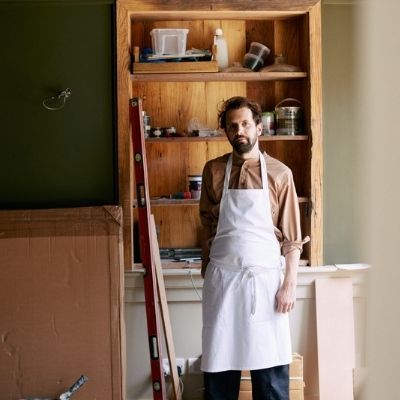